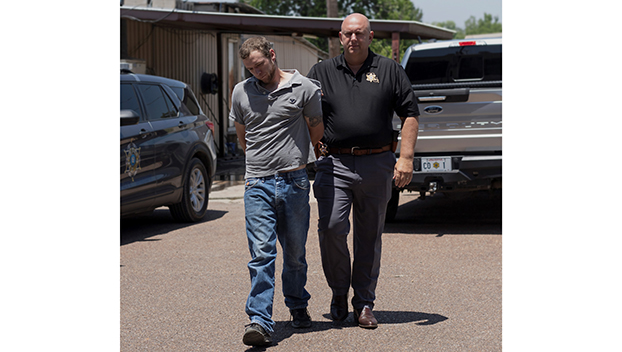 Concordia Parish Sheriff David Headrick takes William Ford, 25, into custody in Vidalia Thursday. Ford is registered as a sex offender for a rape conviction in 2016, the sheriff’s office states. (Submitted)

VIDALIA, La. — A sex offender from Pineville, Louisiana was arrested in Vidalia Thursday for allegedly making plans online to take a minor home with him.

A news release from Concordia Parish Sheriff’s Office states that William R. Ford, 25, has been arrested for computer-aided solicitation of a minor, indecent behavior with juveniles, and driving under suspension and switched license plates.

He was also wearing an ankle monitor at the time of the arrest and had been convicted of forcible rape in 2016, the sheriff’s office states.

He allegedly made contact with a Vidalia minor through social media on May 1, 2022, sent lewd photos and discussed meeting the minor for sexual activity.

He allegedly set up a meeting Thursday and drove from Pineville to Vidalia with plans to take the minor back to stay the night with him.

He instead was met by Concordia Parish Sheriff David Hedrick and CPSO detectives, at which time he was taken into custody without incident, the release states.