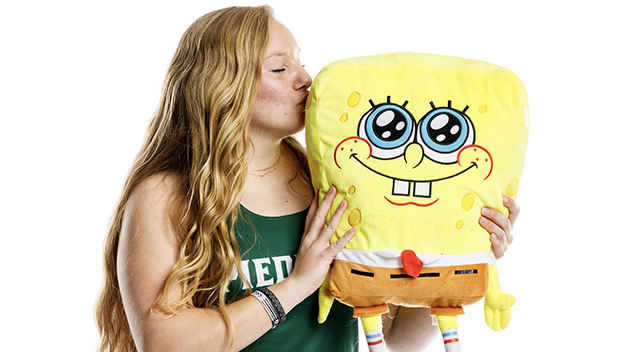 On team photoshoot day, Allie had her picture taken with her stuffed Spongebob. She said she has always loved watching the cartoon and has a pair of socks with him on them for two-day meets. She said it is common for throwers to show off their personalities through socks. (Courtesy Photo | Piedmont Athletics)

Cathedral Alumnus Allie Feltus finished her first year of college at Piedmont University where she competed as a thrower. She picked up from winning a state title in the shot put and discus
and continued her throwing success in college.

“I don’t want to say it wasn’t expected coming in as a freshman but I wasn’t thinking about it,” Feltus said. “From the first meet, I started adding a few centimeters to my throw. It doesn’t sound like a lot but that is what it comes down to.”

Her growth grew more and more. In the course of one season, her throws increased by 11 feet from her marks in high school. This improvement was thanks to
weight training Feltus worked on in the off-season. She did deadlifts and squats to improve her explosive power. Additionally, each week she would tweak something in her technique that was “scary,” but turned out for the best.

Freshman year was a challenge. During the fall semester, she was able to stay ahead with her studies but the spring was filled with track meets. For 13 weeks she didn’t have a weekend to get school work done. During the season she would have to rush back from practice and eat before the dining hall closed before taking on
school work. She had to work hard in the spring semester.

Track distracted her a little bit from being homesick, she missed her parents.She said in high school her parents were always there and every athlete usually had at least one parent at the meets. Being two states away, and in the spring season traveling to six different states, she needed someone in the stands. “My parents came to a lot of the meets and I’m glad they did. I needed a piece of home,” Feltus said. “I needed somebody and my mom was very happy to make my meets. I always did better when she was there. It was special to have both of my parents at the conference meet in Kentucky.”

The USA South Conference Championship Meet was special because Feltus set a school record in the discus throw with a toss of 40 meters. However, it wasn’t the meet that stood out to her the most. Southern Wesleyan was the first out- door meet of the season for Piedmont. SWU was a very religious school. Before
every event, they gave the competition up to God.

“I admired that,” she said.

Her season switched completely once the outdoor season began because it is her favorite. Indoor throwers do the weight throw and shot put and outdoor throwers do shot put, discus, hammer throw and javelin. Feltus said she hasn’t learned how to do javelin yet but may tackle it next season.

She enjoyed having a throwing team this sea- son. At Cathedral, it was usually just her and coach Kevin Campbell and a couple of other kids. Piedmont has nine throwers on its women’s team. It was a big change but one she enjoyed because they made a good atmosphere.

Piedmont had several strong role models on the throwing team and the one she looked up to the most is Sophomore Reaghan Anderson. She will be a junior next year and Feltus will be a sophomore.

“She is very good about taking people under her wing and showing them what to do. Learning new terminology from a coach isn’t always the easiest,” Feltus said. “She was able to show us what to do so we could understand. She was a good team player and I admire her for that.”

Looking back at her first year, she has enjoyed the experience at Piedmont. She said the only thing annoying is the drive to school but it isn’t one she has to make much. Piedmont is small, which is different from a lot of people’s choices for college, she said.

“The professors are nice. You can tell they love what they do and they are willing to help you succeed,” Feltus said.

Moving forward, her goal is to improve her technique. In the discus, everything is so precise and has to be right to have a good throw. This summer she plans to change up her technique a little bit.

“You’ll probably see me throw on the bluff. I’ll be working on a new technique for next year,” Feltus said. “Now I have a season under my belt I won’t worry as much. It was nerve-wracking this year because of how busy it is. It is pretty different from high school.” 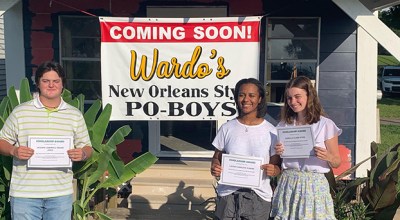