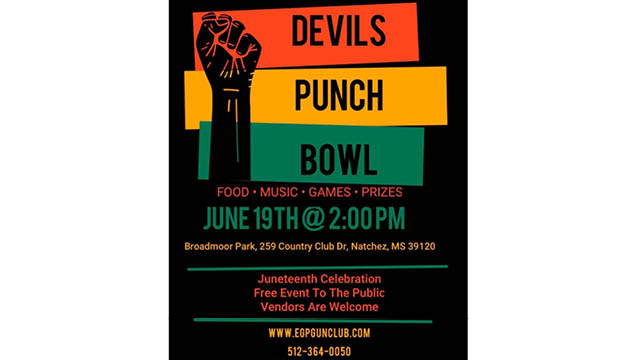 Bezzel, the leader of that gun club, has organized a series of events for Friday and Sunday in Natchez to commemorate what he calls the Black Holocaust at the Devil’s Punchbowl and Juneteenth. He has invited other armed groups to join in.

A Juneteenth Family Day at the Park his group plans on Sunday at 2 p.m. at Broadmoor Park drew the concern of some on the Adams County Board of Supervisor recently, who pointed out no guns are allowed in any county park.

“They are coming here in peace. I don’t have a problem with that,” said District 4 Supervisor Ricky Gray at the board’s May 17 meeting. “But they are going to our parks and all our kids are out there. Then, when they leave, our kids will think it is OK to go to that park and bring their guns. That’s not the message you send into a neighborhood, that it’s OK to bring your guns to the park.”

“If that’s the law, that’s the law. We are law-abiding citizens,” Bezzel said. He said his group would not take their guns into the park.

“As a side note, I do want to address a statement that was made by one of the county commissioners … that the children don’t need to see us bring guns to the park because children will also feel is it is OK to bring their guns to the park. If children are bringing guns to a park, that’s not an issue with us. That’s an issue internally. If kids are bringing guns to a park, that’s not us. Your issue is not with us. His language should be directed to someone else, not us,” Bezzel said.

He said the party at Broadmoor Park will include more than a dozen local food vendors and others selling their products, will offer music and a DJ, will feature a jumpy house and water slide for children. The party will begin at 2 and end at 8 p.m.

“Everybody is welcome to come and enjoy the festivities,” he said. “This is generating money for the people of Natchez. We will have a positive economic impact.”

The first event the group plans in Natchez is Mississippi on the Move: Town Talk, a town hall meeting at the Broadmoor Utilities Community Center, 61 E. Wilderness Road. 6 p.m. on Friday night.

Other events are planned for Jackson on Saturday, but Bezzel and his group will return to Natchez on Sunday morning.

At 10 a.m. at the Natchez National Cemetery, the group will gather to commemorate the Devil’s Punchbowl, where they say 20,000 newly freed slaves were killed by Union troops.

At noon, the Gathering of the Great Armies Formation will begin.

“Black self-defense movements from around the country will unite to take place in this armed march in recognition of those lost to the Devil’s Punchbowl,” an advertisement reads.

Bezzel said the armed group, which he thinks will be 1,000 strong, will march from the Natchez National Cemetery on Cemetery Road to Maple Street, to New Street, to West Oak Street, to Dr. Martin Luther King Jr. Street, to Main Street, to North Canal Street to the Natchez City Auditorium.

“We are open to all organizations who would like to participate,” Bezzel said. “I want to be clear and clarify some things that may have people nervous. Ask yourself, can you find on record any instance that any of these groups went somewhere and committed an act of violence?

“We are working to empower people economically. We have job placement companies coming to try to help some of these young men and women find meaningful employment. We want to be able to help people in Natchez and Mississippi,” Bezzel said.

Adams County Sheriff Travis Patten said he and others in local law enforcement and government have had numerous conversations with Bezzel.

However, the sheriff said Bezzel and his group have been told clearly where law enforcement stands on their activities in Natchez.

“The sheriff’s department, the police department and a lot of supporting agencies have put in a lot of man hours and done a lot of planning to make sure this is a safe event and it does not in any way interrupt the unity of our community,” Patten said.