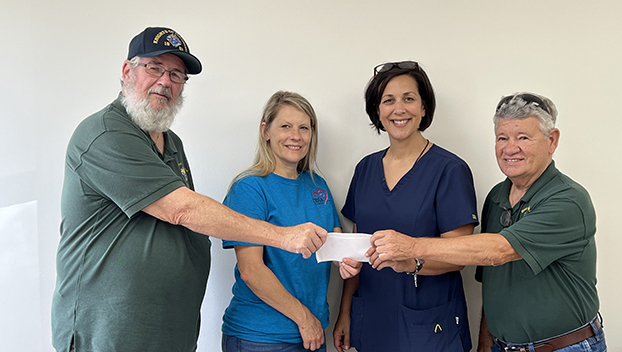 On Wednesday, local members of the Knights of Columbus present a donation to an ultrasound machine at the soon-to-be Miss-Lou Pregnancy Center at 4951 U.S. 84 in Vidalia. Pictured from left are Steve Nielson, Kimberly Butler, Claire Lemoine and Kevin Friloux. (Sabrina Robertson | The Natchez Democrat

NATCHEZ — The Knights of Columbus recently presented an approximately $20,000 donation to a new pregnancy center slated to open next month at 4951 U.S. 84 in Vidalia.

The donation, made possible by the Knights of Columbus organization’s fundraising efforts with area churches, will be used to buy the center’s first ultrasound machine. Both Vidalia and Natchez members helped raise the funds and another $13,000 donation will be given by the national organization, said Steve Neilson, Faithful Navigator of the Natchez post.

Neilson said the organization has plans to continue supporting the new center, which is much-needed for both communities.

“We have the Caring Hearts Pregnancy Center in Natchez, which is very limited,” Neilson said. “There is no medical staff. It’s more or less just a resource and referral point.”

The next closest pregnancy centers are an hour or two hours away.

Claire Lemoine, Executive Director of Cenla Pregnancy Center, said their focus is providing confidential services to women who find themselves with an unplanned pregnancy in a judgment-free environment.

There, they will have access to pregnancy tests, an initial ultrasound, post-abortion support, consultations with trained professionals, educational classes, baby items and referrals to other care facilities—all at no charge.

“It’s a place where anyone in an unplanned pregnancy can go if they need support. If they’re considering abortion, if they’re considering parenting or whatever state of life they found themselves in with their pregnancy, they can come to us to talk about their options. We talk about life-affirming options for them. We do talk about abortions but we don’t refer them for abortions or provide abortions. We talk about what that decision may mean for their life if that is what they choose,” Lemoine said.

She added the ultrasound machine that area churches and individuals helped pay for with their donations would be used for most of their initial screenings for mothers who haven’t seen any other physicians yet.

“We give them verification of pregnancy and have prenatal vitamins for them and we also do an ultrasound … which serves to make sure that the pregnancy is in the uterus and verifies how far along they are in their pregnancy. It also helps to make that connection. … They say the ultrasound is the window to the womb. It’s a good way to connect their mind and heart to this new reality.”

Kimberly Butler will be the director of the Miss-Lou Pregnancy Center, which will initially be open on Mondays and Wednesdays from 9 a.m. to 5 p.m. until it is fully staffed. The new center will also need volunteers to help receive clients, file records and teach classes, Lemoine said.

Inside the facility will be a boutique-like area where participants of educational programs can spend vouchers on baby items such as car seats, baby bottles, clothing, formula and diapers.

The pregnancy center is sustained entirely by donations and fundraising efforts, she said.

The annual Gift of Life Fundraising Banquet, one of the largest fundraisers for the organization, takes place Sept. 13 at the Randolph Riverfront Center on 707 2nd Street in Alexandria, Louisiana, and features actor and evangelist Kirk Cameron as a keynote speaker.

To find out more or make a donation, visit cenlapc.com.

‘At their mercy,’ Cooley reflects on mural controversy