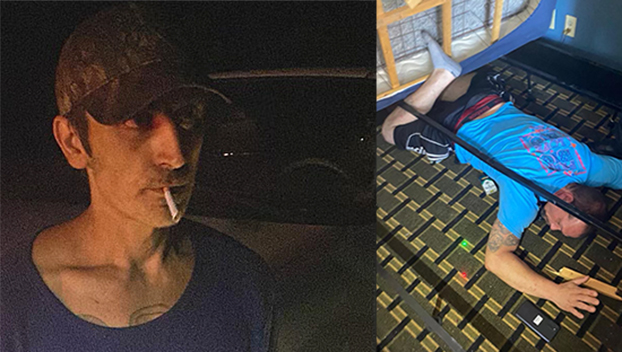 At left, 35-year-old Kevin Paul Martin, is taken into custody Wednesday night. He and 35-year-old Mark Sturdivant, at right, had been on the run since a burglary of a Natchez Church on June 7. (Photos courtesy of Adams County Sheriff's Office)

NATCHEZ — The second suspect in a church burglary is now in custody.

Adams County Sheriff Travis Patten said deputies found and arrested 35-year-old Kevin Paul Martin just before 9 p.m. Wednesday evening after he had been on the run since the break-in at the church more than two weeks ago.

Martin has been charged with burglary of a church, having been seen with 35-year-old Mark Sturdivant in video camera footage taking three television sets from the Washington Baptist Church on Old Highway 84 No. 1 on June 7.

Deputies arrested Sturdivant on the same charge last week. They found him hiding underneath a hotel room bed at the Red Carpet Inn in Natchez in an unsuccessful attempt to evade capture.

Patten gave credit for both arrests to civilians who read news reports about the two wanted men, spotted them and called law enforcement.

“A reader tip lead to the capture of Kevin Martin,” he said. The tip led deputies to Lee Parker Road in Natchez, where Martin was arrested.

Sturdivant also has a warrant for a parole violation with the Mississippi Department of Corrections and has not received a bond.

Both are detained at the Adams County Jail as of Thursday.

‘She touched a lot of hearts,’ Former Alcorn State…