Homeward Bound: Local celebrity deer returns home after seven months on her own 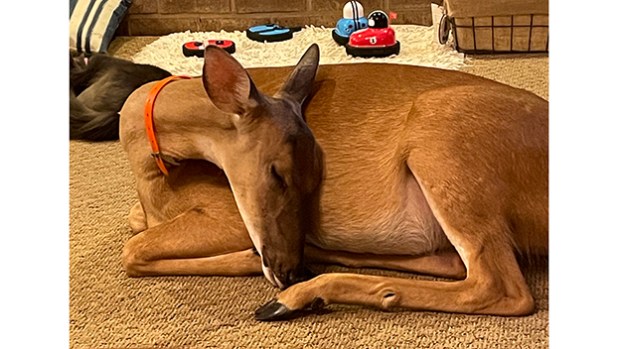 Gigi sleeps on the living room floor at the Mardis house. (Submitted) 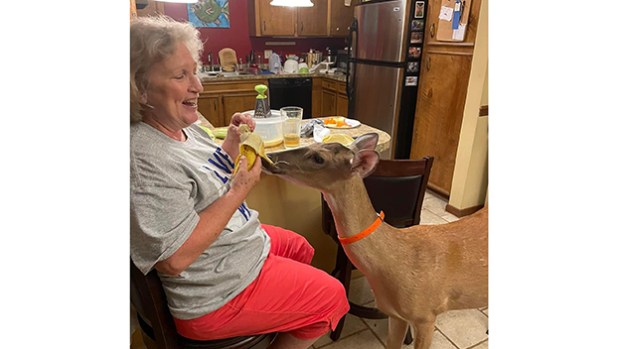 Annette Mardis feeds Gigi some banana, one of her favorites. (Submitted)

NATCHEZ — Annette and Allen Mardis thought maybe they had seen the last of their precious Gigi.

Their pet deer, which they raised since around July 4, 2020, when she was six days old, returned home this week after a seven-month absence.

And Gigi returned home with a surprise. She’s going to have a baby or two of her own.

The Mardises, who live on about 1,200 acres of family land off the Natchez Trace, were thrilled with Gigi’s return. She has become a local celebrity of sorts since Annette began posting photos and videos of her on Facebook when Gigi was a baby.

Her Facebook followers have been delighted by videos and photos of Gigi in the Mardis’s home, curled up on the living room floor, snuggled next to Annette on the sofa or licking their pet cat, Pop Tart, of whom Gigi is very fond. Pop Tart doesn’t seem to mind the affection from the deer.

Her Facebook friends were equally as delighted as the Mardises when Gigi returned Wednesday evening.

“She left us around November of last year. Then, they spotted her on the trail cams out in the woods around the food plots around January, but she didn’t come home until the other day,” Annette said.

A relative who works in a shop that backs up to the woods off of D’Evereux Drive, spotted the baby deer shortly after she was born.

“He watched her, but the mama never did come back,” Annette said. “He brought her to us.”

Gigi was the Mardises first experience with raising orphaned wildlife of that size.

“We have always had deer in the yard. We have had two squirrels that we raised in the house — a black squirrel and a brown squirrel — but nothing like this,” she said.

She started bottle-feeding Gigi and kept her in a kennel in their house for about a month.

The couple even housebroke Gigi.

“She had one accident in the house. I would not have had her in the house otherwise. She did good.”

After about a month, Gigi was introduced to the outdoors and took to it well.

“During the day, she had her spot up against the house. She stayed around the yard, but as she got older, we ventured out more.

“We played with her, she would jump around and frolic, and she followed me everywhere,” Annette said. “And she was in and out of the house.”

She and Gigi have cuddled and loved on each other from the beginning. She will let Allen pet her, but won’t allow the cuddling like she does with Annette.

“She was into everything. When she came in the other night, I had just taken off my earrings, and I had to get one of them out of her mouth. Before, she had to get on her hind legs to get to the counter, but now her head is up to the counter. I had some tomatoes on it and she got a golf-ball-sized tomato before I could stop her.

“Gigi’s favorite foods are apples and bread and honeybuns. And she loves bananas. And the fruit gummy bears Allen gives her as a treat.”

A blessing and a joy

In a number of the photos and videos of Gigi on Facebook, a mounted deer head can be seen on the wall behind her. That has drawn many Facebook comments.

“Lots of my friends have asked, ‘Is that grandpa?’ ” Annette said. “We are deer hunters. Not me, but I have gone and watched. And my daughter hunts on our land.

That is what happened to another deer, Little Bit, who was brought to the Mardises last year at about three months old from a Natchez woman who tried to raise her, but couldn’t.

Gigi wears a brightly colored collar, which perhaps will alert drivers to her if she is crossing the roadway.

Gigi hasn’t returned to the Mardises since her visit on Wednesday night. She came inside, got and gave hugs and kisses, and settled on the living room floor for a good sleep. Annette slept on the couch and let her outside at about 2 a.m.

“I hope she is out back in the woods. People have said she may not bring the babies near us, but I don’t know. She sure is tame,” she said.

The couple has never worried about any ill effects from raising Gigi.

“People would say, ‘You’re going to get in trouble.’ But the law says you can’t fence in a deer. We haven’t done that. Everybody wants to come see her. When she was little, she was there all the time and people could see her, but it’s not like that now.

“We are giving her a good life. She has a chance to roam free. We have the space for her and we love it. She has brought us so much joy. She is amazing. It’s kind of unreal, for her to show back up…You get older and settle at home and to have this blessing on you, it’s just wonderful. I’m the type of person who likes to share things from my garden — tomatoes and squash. We don’t have a big garden anymore, but I get to share this. Gigi has a story and everybody gets to share it.”