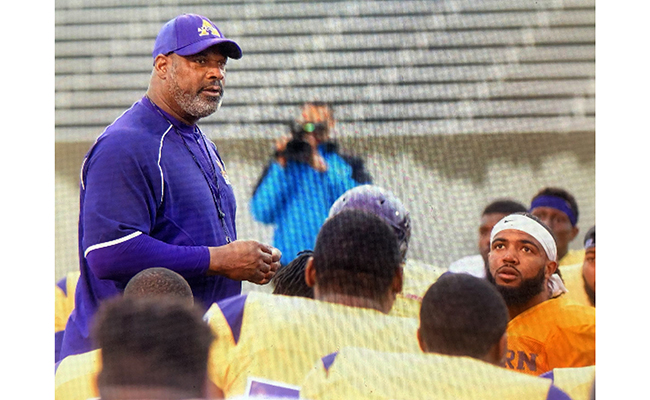 Coach Fred McNair talks to the team after the spring game. in 2018 (Ben Hillyer | The Natchez Democrat)

LORMAN. – Under the direction of Head Coach Fred McNair, Alcorn State Football opened its 2022 #BravesCamp on Friday, August 5, at the Alcorn Practice Fields. McNair, entering his sixth season at the helm in Lorman, was excited about the beginning of fall camp for his side, and saw some things that were quite different from the first day of camp in previous years.

“Being able to work out in July was huge for the day’s rhythm,” McNair commented. “The timing was better than it would have been in previous seasons. The conditioning of the guys was better. The way not as many people cramped up was big. Again, being able to have the guys on campus and get some conditioning in before camp started today…that was big for us.”

Temperatures began around 78 degrees for the start of camp, but quickly rose to the mid-80s by the end of practice. Partly cloudy skies surrounded the practice fields throughout the morning with winds lightly coming out of the southeast around five miles per hour. The Braves worked out for 18 periods for the first day of camp, including three periods of 7-on-7 work.

With the question “who’s taking over for Felix Harper behind center” being the obvious question heading into fall camp, co-offensive coordinators Elliott Wratten and Jason Phillips were both seen talking to the quarterbacks as they rolled through drills. Phillips spent the majority of the time with quarterbacks, while McNair was also seen charging the group during individual group sessions.

With the Braves defense bringing back two headliners in the form of Claudin Cherelus and Keyron Kinsler Jr., the defensive backs are expected to be a key part of the defensive unit for the upcoming season.

Assistant Coach Leroy Frederick is in charge of the receiving core, as the group is spearheaded by senior CJ Bolar and redshirt seniors Juan Anthony Jr. and Manny Jones. Receivers were able to get the better of the defensive backs during a few plays within the 7-on-7 drills. However, during the final 7-on-7 portion of the morning, it was the defensive backs doing most of the talking with breakups and deflections.

“I thought the defensive backs did a really good job today, despite the fact we didn’t have any interceptions,” said McNair during his postgame availability with the media. “That’s good and bad, in a way. But all-in-all, the defensive backs were in the right positions and made some great jumps on the ball for breakups.”

A key component to the McNair RPO style offensive attack for the Purple and Gold consists of the offensive line. The offensive line will have a relatively new look across the front, as Wratten was seen spending the majority of practice guiding the group through a multitude of drills.

“The offensive line looked solid, for the most part,” exclaimed McNair. “They are being asked to come in and make an impact quickly for us. And I think they’re handling that task well so far. I think we may be able to do some good things if they keep improving and protecting the quarterbacks.”

While the first day didn’t highlight individual players, it was the defense that appeared ahead of the pack, despite only returning four starters from the 2021 campaign.

Alcorn State continues #BravesCamp 2022 on Saturday back at the Alcorn Practice Fields. Practice is scheduled for 2 p.m.