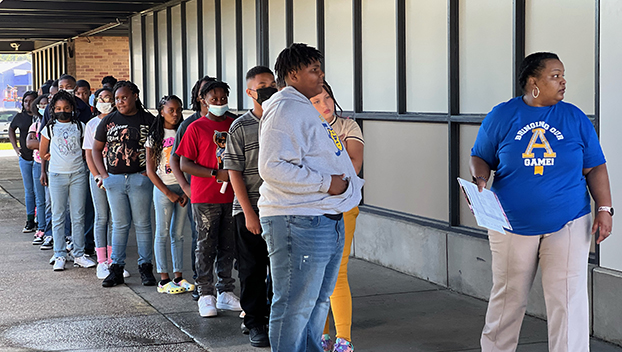 Middle school students walk to the cafeteria while touring the campus on their first day back to school from summer break. (File photo | The Natchez Democrat)

NATCHEZ — Natchez Adams School District’s student enrollment has picked up drastically over the past three weeks since school started but still lags behind last school year.

When school started on July 28, Superintendent Fred Butcher said the district had a record low of approximately 1,800 students enrolled. The number enrolled has since increased rapidly.

“If we can establish 100 out of these 168, we feel like we’ll be OK,” Butcher said during a special called board meeting Tuesday.

The school district opened registration this year in March 2022, before the 2021-22 school year ended.

“The window for registration this year was longer than ever and we started school with the fewest ever students,” Butcher said.

Each school in the district lost students with the exception of Natchez Early College, which enrolled eight more students than last school year for a total of 197 students.

Natchez High School and Natchez Freshman Academy are down 90 students from last school year with a current enrollment of 580 students. McLaurin, Morgantown and West Elementary Schools are down by 72 students combined. Natchez Middle School, which was previously Morgantown Middle School, is down by 18 students.

While school enrollment is required by law for students in first grade and above, Mississippi law does not mandate that parents enroll their children in kindergarten, said Deputy Superintendent Zandra McDonald Green.

“These numbers are fluid because we’re not comparing the same groups of students,” Green said. “Kindergarten we can’t really gauge but we can look at historical numbers and make a projection. For kindergarten, we know those numbers are low than what they were last year. We started in the spring working with MAP (Mississippi Action for Progress head start program) to see a roster of students they serve that should be coming into the Natchez Adams School District and making contact with those parents to get those students registered with us.”

Butcher said the district has been meeting with social workers and its dropout prevention coordinator to put a plan in place to identify where “no show” students are.

In other matters during Tuesday’s meeting of the Natchez Adams School District, the school board unanimously approved a $4 million tax anticipation loan with an interest rate of 4%. The district has customarily taken out a tax anticipation loan each year to get the district through low-income months before property taxes are received. The district receives 60 to 64 percent of its revenue for the school year after March, said Tim Byrd, the district’s business finance manager. Byrd said the district was in a “favorable position” financially with a cash balance of $3.2 million.

With ongoing construction at Natchez Middle School and Natchez High School, he said, “We’re remaining diligent about our costs.”