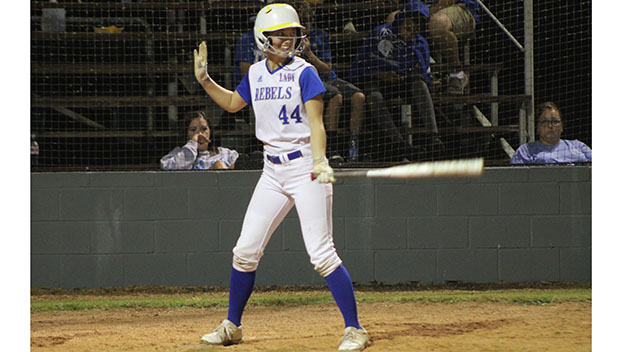 Georgia Martin snapped out of a slump and helped the Rebels get their first win of the season. (Patrick Murphy | File Photo The Natchez Democrat)

NATCHEZ — Rileigh King pitched four innings of four-hit ball and Georgia Martin had two base hits as the Adams County Christian School Lady Rebels finally earned their first win of the season Tuesday afternoon with a 13-1 win over the Central Hinds Academy Lady Cougars in an MAIS District 3-5A game.

King, an eighth-grader, has been the starting pitcher for most of the 2022 season. And while she has had some good performances on the mound, the Lady Rebels have had to not only deal with a tough schedule, but having to deal with their own roster.

“She’s doing the best she can filling in for our starting pitcher, Mia Drane,” Lady Rebels head coach Tate Lipscomb said. “We’ve had some injuries and had some players play different positions. Trying to fill in the void.”

Lipscomb said that King didn’t have her best stuff on the mound, but she was mentally tough and had the back of a defense that for the first time all season did not commit a single error. King also got plenty of early run support as ACCS scored three runs in the bottom of the first inning.

Central Hinds scored its only run of the game in the top of the second inning before the Lady Rebels answered with five runs in the bottom of the second for a commanding 8-1 lead.

While the Lady Rebels had just six base hits in the game, they took advantage of several walks and three errors committed by Central Hinds.

“Camren Strittman’s been consistent. Georgia Martin had two base hits. She’s been in a slump for most of the season. But it was a team effort,” Lipscomb said.

Lipscomb added that it felt good for him and his players to get that first win of the season, especially against a district opponent.