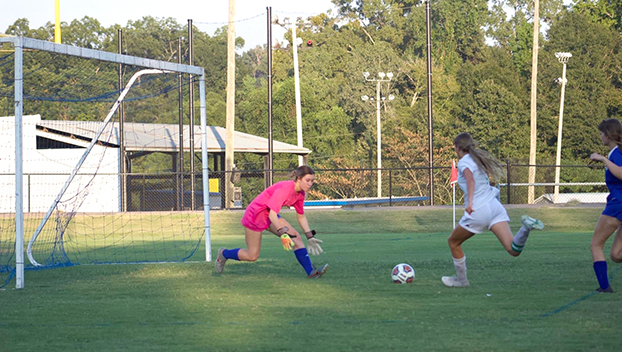 AC goalkeeper Paige Switzer lunges to pick up a ball before a Cathedral forward can get to it. She helped the Rebels win a 7-6 thriller by saving two penalty kicks in the PK shootout and making at least five saves in the regular time of the game. (Alicia Jordan Switzer | AC Athletics)

At halftime, Cathedral and AC were tied up at 1-1. Rebels Head Coach Chris Hughes said he and his fellow coaches asked the girls to keep up the intensity and go for another goal against the Green Wave.

Cathedral took a 3-1 lead before AC clawed its way back into the match and tied it up 3-3. In overtime, Cathedral took the lead on a beautiful header at the end of the first 10 minute period. The second overtime period, AC scored a goal to tie things up.

“The girls were fired up and they didn’t get too down on themselves,” he said. “They figured they had not lost the game. They knew they still had to play 10 minutes and had it in their mind they could get it back. We asked them if they wanted it and they were fired up. We were really resilient to come back and win it on PKs.”

McKenzie Campbell scored three goals for ACCS, Mallory McIlwain scored a penalty and Maddie Donaldson scored a goal for the Rebels too. Hogue was proud of the girls for coming back from a loss on Monday and winning on Tuesday.

It was senior night and the last time they played at home this season. Hughes was happy to send his seniors out with a win although they have one more game against Cathedral left. He is unsure what their playoff picture might look like.

AC’s most valuable player in the game was goalkeeper Paige Switzer, he said. She made about 13 saves in the match.

“She made about five saves on quality chances in the game and in the PK shootout she made two saves,” he said. “I give her the MVP. Cathedral could have won the game had she not stopped those goal scoring chances. We would have lost without her efforts.”