3 weeks ago by Editorial Board.

Gibson is our pick for next Natchez Mayor

Natchez voters will go to the polls Tuesday to elect a new mayor to serve Natchez over the next four years. Read more

Bridgewater-Irving gets our pick for Ward 4 alderman

Being an effective alderwoman requires meeting, connecting, communicating and working with residents to do the public’s business. Read more 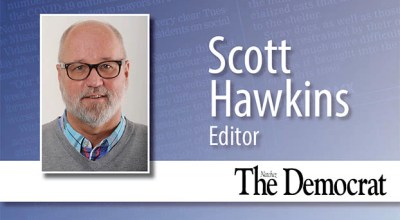 Natchez voters will go to the polls Tuesday to cast ballots in the Natchez municipal general election to decide who will serve the next four ... Read more

Hall is our pick for Ward 1 Natchez alderman

Voters will go to the polls Tuesday to vote in the Natchez municipal general election to decide who will serve the next four years in ... Read more

If open for business signs are displayed in local shop windows and there are no tourists to see them are the shops really open? Read more

America’s Founders regarded a free press as so vital to the new nation that they took care to include that right in the First Amendment ... Read more

Celebrate our freedoms safely this weekend

On Saturday, we celebrate our nation’s independence from Great Britain with the anniversary of the signing of the Declaration of Independence on July 4, 1776, ... Read more

People throughout the Miss-Lou, state and nation were appalled last week when the Turning Angel statue was damaged after it was toppled from its pedestal. Read more

On Saturday we will celebrate our nation’s independence. Read more

Natchez Bicycle Classic will be Ride not Race

It’s a Ride not a Race! The Natchez-Adams Chamber of Commerce Young Professionals and Leadership Natchez are delighted to announce the rebirth of the Natchez ... Read more

Keeping COVID in check is now up to each of us

The Natchez Board of Aldermen made the right decision Tuesday night when they voted to delay proceeding with improvements to the community swimming pool until ... Read more

No doubt the COVID-19 pandemic has dealt a blow to the City of Natchez’s coffers. Read more

Treat others as you would like to be treated

Reality eventually wins out despite our desires

A few weeks ago when President Donald Trump announced he would hold a June rally in Tulsa, Oklahoma, many people expressed concerns about the potential ... Read more

The past weeks of protest and riots have really messed with my mind. Read more

Those who believe the COVID-19 crisis is declining or believe the pandemic is overblown need to peek inside what is happening at the Vidalia Mills ... Read more

Join us for Unity March on bluff Saturday

In celebration of Juneteenth, the oldest holiday commemorating the ending of slavery in the United States, we ask that the Natchez community and surrounding cities ... Read more